What were our greenhouse gas emissions this year?

Scope 3 emissions are other indirect emissions that occur as a result of our operations. The reporting of these emissions is less clearly defined as the boundaries are determined by the entity disclosing the emissions, and by what is practical and useful. For example, we report the emissions for waste which is collected by waste disposal contractors and disposed to landfill.

The Scope 3 emissions that Wesfarmers reports include:

Which scope 3 transport emissions are we reporting?

Many of our businesses have complex supply chains. Transport of products along these supply chains creates emissions.  Transport from distribution centres to stores is largely undertaken by contracted transport providers.  We estimate our scope 3 transport emissions for this type of transport to be 13,000 tonnes CO2e this year, based on the emissions of our major transport providers transporting goods from distribution centres to stores for Coles, Kmart, Target and Bunnings and from mine to port for Wesfarmers Resources.

What is NGER Act Reporting?

Under the National Greenhouse and Energy Reporting Act 2007 (NGER Act), companies that exceed a threshold are required to report particular Scope 1 and 2 emissions that are emitted by entities under their operational control. It makes more sense to compare these between companies because the types of emissions that must be reported are consistent.

In this report, Wesfarmers chooses to report some additional Scope 1 and 2 emissions that are not required to be reported under the NGER Act, to give a more complete picture of our emissions profile. These include certain refrigerant gases, emissions from businesses that are owned but not controlled by Wesfarmers (such as our Port Kembla air separation unit) and international facilities.

Our Chemicals, Energy and Fertilisers division and our Resources division both include liable entities under the Clean Energy Act and its Carbon Pricing Mechanism, and have been compliant with their obligations under that legislation. Both entities have met their commitments for the surrender of carbon units. Further information about Wesfarmers’ NGER Act reporting can be found here.

Why does Wesfarmers report emissions intensity?

This year, our emissions intensity decreased. 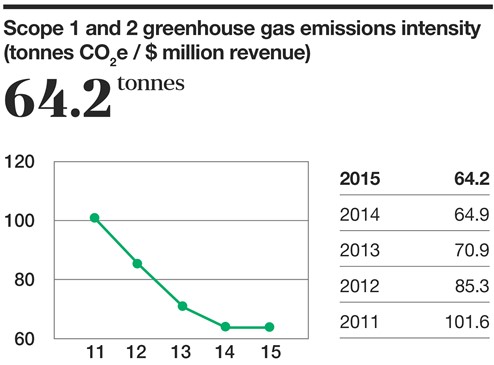 Feedback Print this page Back to top
Wesfarmers